How Does Dr. Slambow Select a New Scrub Nurse?

The operating room is fertile ground for the cultivation of some genuine mysteries: Why can Lactated Ringers solution be administered to someone who is not lactating?...How many anatomical variations are there of the cystic duct encountered  in gall bladder surgery?...  Is normal saline solution still normal if used to irrigate abnormal pathology?...Why are some organs present in pairs?.. Why does a needle holder only make a single click when closed on the second ratchet?.. Why  do whippersnapperns call needle holders needle drivers?  I better stop before I drive myself crazy.

I was recruited to be an operating room nurse  by Dr. Slambow, our senior surgeon and procurer of scrub nurses during  my last year of nursing school. A few weeks before graduation, Dr. Slambow called me to his office which was actually located in an old unused operating room at the very end of the hall which was lined with the functional ORs. This was the same room we used for our infamous Thanksgiving turkey autoclave roast. I was scared silly, but Dr. Slambow was actually very pleasant and asked me, "How would you like to be an operating room nurse? I've had my eye on you and think you would do well here."  I was shocked, but knew I wanted to be an operating room nurse since I was knee high to a kick basin.  When I was in high school, the other students were obsessed with attending concerts but I used to love to visit the Museum of Surgery on Michigan Avenue in Chicago. I tired to say yes, but was so overwhelmed that my "Yes"  came out garbled. Dr. Slambow smiled from ear to ear and said, " I will take that as a yes, welcome aboard.You can start the Monday after graduation."

When  I started working in the OR, I noticed that my colleagues were all very similar in physical size and temperament. I wondered how this all came about and really wanted to solve this mystery. We were all too much alike for this to happen purely by chance. I was also taken aback by Dr. Slambow's  comment that he had his eye on me. The most contact I remember with him occurred at our frequent  nursing school teas. These gala occasions were held afternoons in the cavernous nurses'  lounge which occupied the entire second floor of our nursing school. We celebrated capping, banding, or any event our intrepid instructors wanted to celebrate. Dr. Slambow was a frequent fixture present at these teas usually bringing along one of his surgical residents. 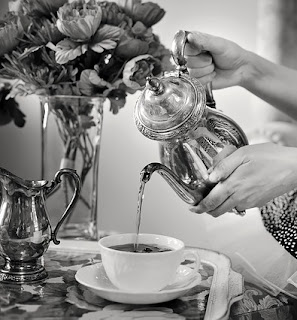 After working with Dr. Slambow and establishing some familiarity, he began to reveal some of  the techniques in his scrub nurse selection process.  I thought he was just being cordial as he attended our events and repeatedly filled our tea cups.  He later confided in me that these teas were his initial evaluation of a "coffle" ( in Dr. Slambow's vernacular) of student nurses. I was shocked to learn the term coffle referred to a group of slaves that were bound together. He always treated us well but I guess slave owners did the same. I always viewed the OR as a kind of plantation after hearing that "coffle" business. It was very clear who was running the show.

He explained that attending nursing tea parties and observing which nurses could drink the most tea without a bathroom trip winnowed the coffle down to a manageable group of potential scrub nurses. Aha! That was why Dr. Slambow kept filling my tea cup and I thought he was just trying to be nice. It was all a part of his selection process.

"My scrub nurses must be tall," Dr. Slambow explained. "I like my instruments to come into my hand from above as if from heaven and that takes a tall nurse to do this. I also like the scrub nurse to look down on the field and anticipate my needs and whims."  Dr. Slambow was only about 5'4" so you did not have to be really tall to meet his criteria and footstools were always available for an extra boost in height. I was a good bit taller and Dr. Slambow seemed to really take a shine to me. So far I had passed the bathroom bladder holding test and met the tallness requirement. Things were looking up.

Dr. Slambow did not like really brainy scrub nurses. Smarts were unnecessary and perhaps dangerous in the OR according to Dr Slambow.  It was not helpful to be very clever or think beyond the current situation. Overthinking a situation frequently leads to calamity in the OR. I remember making a dumb mistake and saying "I never said I was smart."  Dr. Slambow quickly replied that not being too smart was an asset and  had I been really smart he would have never hired me. I think Dr. Slambow had even calculated that a cranial volume to bladder capacity ratio of at least 1:2 was necessary to be a scrub nurse.

Another trick Dr. Slambow employed at out tea parties was the overflowing tea cup caper. He would offer more tea and deliberately overflow the cup spilling hot liquid all over the table. If the student nurse quickly blotted up the tea with a napkin, she was a keeper in the scrub nurse selection process. Nurses that were slow on the draw with a napkin or wiped the tea were better off working in psych according to Dr. Slambow because wiping  away blood from the surgical site in the OR was a good way to dislodge clots. Speed and blotting were the key elements he looked for  here. 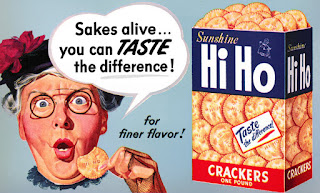 Low budget horderves consisting of Sunshine HIHO crackers smothered in canned liver pate' or Red Devil ground ham were always served at our nursing school teas. I liked the way the liver pate' congealed and separated as it rested on the cracker. It always reminded me of a chromatography separation experiment in chemistry class.  They were always served on a giant silver tray. Dr. Slambow would ask an unsuspecting young nurse for a treat from the tray which was too big and unwieldy to pass. If the nurse just selected a cracker at random and passed it to Dr. Slambow she was off the selection list. The correct response was to quickly ask which kind of cracker and expediciously pass it to Dr. Slambow. There were bonus points awarded if he observed the student nurse devouring the liver pate' crackers. They had an offensive texture and odor to some, but I loved them. Dr. Slambow quickly deduced that if a nurse liked liver pate' she probably could tolerate inhaling Bovie smoke and other unsavory sensory events in the operating room.

One of the first commandments a scrub nurse learns is to ALWAYS pass an instrument first to the attending surgeon, residents can wait and if they get smart alecky, crack their knuckles with a sponge ring forcep. (Only do this if you are very experienced or noted Dr. Slambow doing it first.) I was too much of a chicken to try this, but have seen old crusty nurses do it with delight.  Dr. Slambow was frequently accompanied by a bright young surgical resident when attending our teas. If the novice student nurses paid more attention to Dr. Cutrhoid (the resident) than Dr.Slambow she was dimissed as a scrub nurse candidate. Attending surgeons were always top dog. You were not supposed to kiss up to Dr. Cutrhoid, the resident, and  a crack on the knuckles with a tablespoon when he reached for too many horderves may have earned bonus points with Dr. Slambow.

Dr. Slambow did not like any display of emotion and always bragged about how he beat  his fear and anxiety into submission as a resident.  Somehow I always managed to present a cool, calm demeanor even if my heart was racing or I was getting sensory overload from unpleasant stimuli. Sometimes, when stressed my hands would shake, but I developed strategies for this. (Please see my post: Fools Foils For Fasciculating Fingers.)   Dr. Slambow always said you cannot get anything done if you get too emotional and if you were diligent and concentrating only on the task at hand, dangerous emotions could be kept at bay. His theory worked well until something went haywire during a trauma case and Dr. Slambow would vent by yelling at an innocent scrub nurse. I always thought to myself that I did not inflict the trauma or cut a big hole in the poor soul's abdomen: so leave me out of it.  I never engaged with Dr. Slambow   during one of his tantrums.I always thought how paradoxical it was when he talked about how important it was to remain detached and unemotional. Anyhow,  we were all friends at the end of the case when we rehashed events in the break room.

Back in the old days doctors were in charge of virtually everything that happened in the hospital. Hiring and firing, determining length of stay (no pesky utilization reviewers), and the course of treatment. Dr. Slambow was a very patient centered surgeon. He was most happy when a trauma patient we had operated on walked out of the hospital. Finances were of little concern to him; we worked at a genuine charity hospital and Dr. Slambow drove a beat up Volkswagen Bug.

I think of Dr. Slambow whenever I see a health care provider (I hate that term) and the first thing asked for is my insurance card. Dr. Slambow or his office nurse never asked a patient for any financial information, the priority was solving the problem or getting the person back on their feet.
I wish he were around today to tell all the insurance company MBAs, drug salesmen, administrators, and all the permutations of nurses that have bailed from the patient's bedside what he thought of their ilk. It would not be pretty.

This post got way too long and I wanted to describe Dr. Slambow's unique perspective.   Maybe next post. He was the most unusual surgeon I ever scrubbed with. One of his favorite stunts involved swapping roles with the scrub nurse. He would bellow "Nurse go down there and assist Dr. Cutrhoid (the resident). I'm taking over your mayo stand."
Posted by Oldfoolrn at 6:02 PM