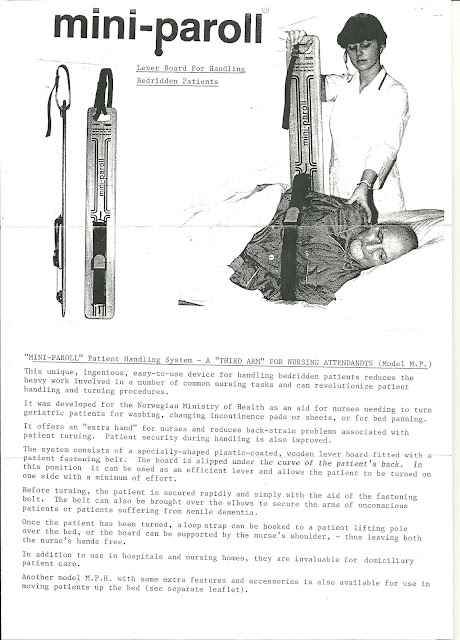 I think it was Archimedes who said, "Give me a big enough lever and a place to stand and I will move the earth." This nifty device looks to be a combination of a transfer belt and a sliding transfer board. I have used the transfer belt and boards independently, but combining the two is a sheer stroke of genius. I even came up with an advertising jingle, "The Mini-Paroll - It's half board and half lever- How clever."  It's probably a good thing that I've made a vast fortune from being a scrub nurse as I don't think I would survive in the advertising business.

I never considered using a transfer board as a lever. We would remove the wheelchair armrest and place one end of the transfer board on the chair while the other end rested on the bed. This formed a bridge that the patient slid across unto the chair. Some patients even learned how to do this independently.

That Mini-Paroll does not look too "mini" to me. It looks somewhat uncomfortable from a patient's perspective to have that board strapped on and then having the nurse apply torque to it. Another problem I see is that while it would work for turning the patient, it would not help with lifting which is where assistance is really needed.

I do not think I would like to see the regular size version of this device with which you could probably apply enough torque to a patients back to cause injury. Another problem I imagine would occur if the patient turned on his own with the Paroll strapped on. It could probably smack the hapless nurse with considerable force. It looks like a novel device, but with some limitations
Posted by Oldfoolrn at 6:23 PM