The Hoyer Lift - A Boon for Peristalsis

It always excites me when a patient or nurse discovers  a secondary benefit to a nursing intervention or procedure. These are usually serendipity findings and it's like finding a buy one get one free at the supermarket.  Hoyer mechanical  patient lifts have been around for a very long time and are great for bed to chair transfers. These lifts are basically a large steel frame with a boom that can be elevated by pumping a hydraulic jack. Some patients dislike them because the machine and not the nurse is doing all the lifting. One patient even complained that Hoyer Lifts were inhumane because of the lack of physical contact with the nurse during transfer. If anything was inhumane, I believe it was the compressing of  the nurses vertebral discs tighter than a coiled python during the manual lift. I have worked with many nurses that have sustained career ending back injuries during patient lifts, but that's a tale for another post.

The cracking and crunching noise of vertebrae in the nurse's back is replaced by the whooshing noise of a hydraulic jack. Now that is real progress.

I once cared for a quadriplegic named Cecil that managed to incorporate the Hoyer Lift into his bowel routine. We used straps instead of a sling for the patient-lift interface. A narrow 2-3inch strap was placed under Cecil's arms and knees. When the lift was elevated, the straps induced a tight flexion of Cecil's knees toward his chest.  This position combined with the jerky lift motion of the hydraulic jack was perfect for inducing bowel movements. It was simple physics. When the sudden upward motion of the colon decelerated the contents of the bowel remained in motion and promptly exited onto the floor.

The first step was to ascertain the drop zone on the floor and cover the area liberally with blue pads. Next with Cecil in bed on his back we would thread the straps under his arms and knees. We would then lower the bed to increase the lift off area so there would be a maximum number of herkey-jerkey movements with the jack. Next step was to aggressively pump the hydraulic Hoyer lift and pivot Cecil out of bed so he was hanging in mid-air above the blue pad.

The end result was fantastic, essentially a flying code brown. Gravity worked wonders pulling the effluent away from Cecil making clean up a breeze. The combination of the jerkey lifting, flexed at the waist positon and gravity worked every time. 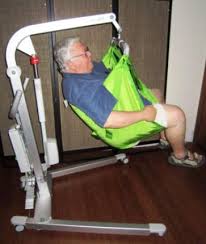 Substitute straps for the sling to provide a bit more flexion at the waist, place blue pads on the floor, pump hydraulic jack like you mean it and PRESTO a flying code brown!
I mastered another bit of foolishness with a Hoyer Lift that used to really entertain Cecil. I would balance myself while lying prone across the center of the lift bar and then raise myself up by reaching over and pumping myself up into the air with the jack. This was a self taught skill and not very professional, but it was well worth it to hear  Cecil laugh like a hyena. For Cecil a great day would include a flying code brown and then watching the nurse self-elevate with The Hoyer Lift. Oh, the simple pleasures of life!
Posted by Oldfoolrn at 5:17 PM