Adventures in Asepsis or I've Got Your Back 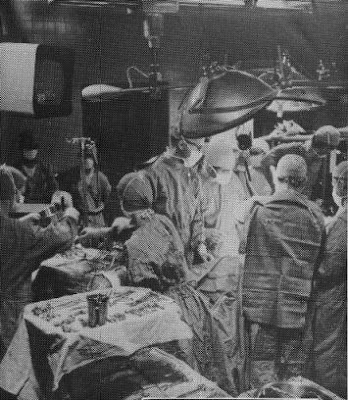 What's wrong with this old school photo of a big time surgical procedure? First of all the television in the upper left hand corner is blank. Who forgot to pay the cable bill? Sorry, I can't seem to dispense with the foolishness, it's part of my nature as I age.

The central character in this post is actually the surgeon stationed next to the scrub nurse who is ignoring at least two rules of aseptic technique. His back is turned away from the scrub nurse's sterile field mayo stand and the fact that the back of a surgical gown is never sterile. But lo and behold he figured a way to get around rules. Check out his back. Some clever soul has clipped a sterile towel to his back. Is this  a legitimate way to extend the sterile Field?

The truth of the matter is that I have been a practitioner of this questionable act. If the surgeon was reaching for anything toward the head of the table his unsterile back could be facing my Mayo stand. The towel on the back trick did create some suspenseful moments. Towel clips work by the convergence of a pair needle like tips. To safely apply towel clips to a surgeon's back the first order of business was to have the good doctor lean backwards to obtain some separation between his scrub shirt and bare skin. It was not good form to pierce the surgeon's dermis with the towel clip, although at times it was tempting. Dr. Slambow would always joke with the resident and tell him that I was very experienced doing this and then added, "It won't hurt a bit."

The other important point was that you only get one chance when deploying a towel clip. It cannot be removed once ratcheted or it will bring contamination to the surface of the sterile field. Once that towel was in place it had to stay there.

Nursing supervisors usually hated this practice because it was a deliberate flaunting of rigid authoritarian rules. When my supervisor questioned me about this practice, I always deferred responsibility to Dr. Slambow.  Nurses had to submit to surgeons and Dr. Slambow knew how to quiet Alice's protests. He usually said, "Alice, it's time to zip it, what else are we supposed to do?" He really was a master at quieting Alice down.

I really thought this was an interesting way to get around rigid rules, but I don't think it is what today would be called "a best practice." I'm really curious if this practice is ever implemented today.
Posted by Oldfoolrn at 6:41 PM