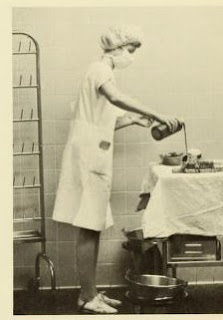 Before operating rooms were appointed with expensive, sophisticated electronic devices, they were supplied with "furniture." I found an old circulating nurse checklist in my nursing junk pile archives  and an important element of her duties was to make sure the room was properly "furnished" before the start of a case. That beautiful chrome device to the nurse's left in the above illustration is a gleaming sponge rack. Pity the poor fool that had to clean this device, those gleaming spikes were blood magnets and a well used sponge rack looked like it was a refugee from a torture chamber. We used to wheel bloody sponge racks into the ortho cast room where there was a floor drain and a high pressure water supply to clean them. It was fun to douse the bloody racks with hydrogen peroxide and watch the bubbly red  and fizzy show that ensued. That stuff cleaned up blood so well you could hear it work.

Here is how that functional piece of gleaming  furniture worked. There are usually two flavors of sponges that we carefully kept track of. Laparotomy or "lap" sponges and smaller 4X4s or in our old time vernacular "stick sponges" because they were always used on a ring forceps or sponge stick. Fold the 4X4 in half and then fold in half again snap it into a sponge ring forceps and PRESTO, you just made a sponge stick. I always thought of sponge sticks as the kindling to  launch a very nasty diatribe from Dr. Slambow. If a hapless resident mopped up blood from the wound with a windshield wiper like motion the fireworks began. Dr. Slambow would bellow, "You just wiped away all the clots, Are you training to be a barber surgeon? Next time dab the blood, never wipe."

Lap sponges came in groups of 5 and 4X4s always came in groups of 10. The sponge rack had several rows of vertical spike like rods on the top and more rows underneath with the rods much closer together. There were 5 spikes in each row on the top and 10 spikes in each bottom row. The laps get hung on the top spikes via a loop on the corner of each sponge and the 4X4s get skewered on the spikes below. The more timid nurses wore gloves during this procedure but were at risk of being accused of trying to bankrupt the hospital by overconsumption of  valued resources like gloves. When the case is over, check to make sure each row of the sponge rack is complete or you have the sponges necessary to complete a row left over on your Mayo stand. Your sponge count is correct and you may advise the surgeon that it's OK to close up.

In real life, surgeons did not pay a whole lot of attention to the circulating nurse announcing that the count was correct. If the surgeon was told the sponge count was incorrect, the standard response  was, "It's not in here, I'm closing."

Sponge racks were an efficient way to maintain an accurate sponge count, but they also had secondary benefits. In a previous post "What's the Prognosis Doc," I neglected to mention the sponge rack drip sign. If a sponge from an upper rack drips blood onto a lower rack, things are not going well. This sign was most common in trauma surgeries and was a grave prognostic indicator.

Men really are more sensitive to visual stimuli and the sight of a sponge rack loaded with blood soaked sponges got more attention than a girlie pin up photo in a soldier's barracks. The sponge rack was a graphic visual display of blood loss.  This could be a real boon to the nurses in the classic anesthesia vs. surgeon transfusion argument. The sponge rack told the story of blood loss  and  usually left the nurses out of the classic transfusion  argument.

When anesthesia attempted to use the volume of blood in  the OR suction bottle to bolster their argument for blood replacement, I knew what to say. Dr. Slambow would insist that the volume of irrigant  was huge and the suction bottle was not a reliable indicator of blood loss. He would then nod to me and I would nonchalantly reply, "Oh yes, I have used a couple of bottles of irrigant." It was a classic reply just like the drunk who told the cop he had consumed just two beers.

Sponge racks also spurred my contemplative thoughts. Looking at he blood soaked sponges,I marveled at where all this blood had been as it constantly coursed through someone's body. It had been batted about by heart valves, squeezed through tiny openings, exchanged gas in the alveoli, and absorbed nutrients from the gut. It seemed strange to see something that had been in constant motion just sitting there. The pattern of the bright red blood on the sponge was the operating room equivalent of a Rorschak ink blot test. I have personally seen lots of angels and crosses etched in brilliant red on the hanging lap sponges. I usually tried to only see good or encouraging images in the blood stains, but I swear once on a gunshot trauma victim there was an accurate image of a pistol. YIKES.. I better just stick to counting the sponges.

Part of my daily routine after coming home from working in the OR was to sit down and watch "Andy's Nickelodeon Theater on WGN (channel 9) TV. My favorite part of this show was watching Three Stooges Shorts. I became convinced that a sponge rack would be a perfect prop for one of their routines. Dr. Slambow was always hollering at new scrub nurses about their casual handing off of surgical instruments. He relished a very hearty slap of the instrument into his waitng hand. If a novice scrub nurse passed an instrument without the slap, he would bellow, "Let me have it so I can feel it!" I imagined that this would have been the perfect time to lob a blood soaked lap in his direction. The sponge had that gooey, sticky feel to it just like one of the Stooges pies. "Here is blood in your eye." I would holler back as I lobbed the sponge.

Like many other elegant objects made of durable metal, sponge racks were killed of by the widespread use of plastics. In 1970, give or take a year someone came up with an alternative to sponge racks. The kick basin was lined with a plastic bag and the  overwrap from an instrument tray was draped over the plastic bag. The scrub nurse tossed sponges into the kick basin and when there were 5 laps or ten 4X4s in the basin, the circulator  grouped them together and tossed them under the overwrap. This newfangled method worked well, but the visual impact of a loaded sponge rack was gone forever.

Posted by Oldfoolrn at 6:14 PM