Surgeons and nurses toiling in an operating room become habituated to a very controlled environment where everything from lighting to air quality is subject to rigid regimentation. Unpredictable events throw a monkey wrench in the midst of this enforced order, often times, leading to a cascade of adverse events  which can result in personal  injury to staff.

Voice modulation morphs into a surgeons unduly harsh verbal  admonishment of the offending party. Harried nurses, desperate for a resolution to the problem throw caution to the wind and find themselves in a precarious situation while attempting to solve the problem. Desperation seldom leads to reasoned thinking. The ensuing pandemonium is enough to flummox a pope.

Operating rooms can be dangerous places. Surgeons waiting for someone to fall asleep before cutting them might, at face value, seem unsavory, but the notion of live by the sword; die by the sword holds true in the OR.  Those sharpened chunks of stainless steel do not discriminate when inflicting their trauma and Bovies don't care what  tissue they roast.

As a circulating nurse I was known for constructing elaborate platforms for height challenged scrub nurses. My colleague, Janess, loved my elevation tactics and was so enamored with one of my creations she failed to notice an unusually low hanging overhead light. As she emergently  ascended my stairway to operating room heaven for an urgent trauma case,  the crown of her head struck the low hanging illuminary with a sickening THUD..CRASH. After finishing the case, a close inspection of her cranial vertex revealed a hematoma the size of the distal end of a Babcock. After a quick neuro check and 15 minutes with an ice pack she was back on duty. I've witnessed several intraoperative injuries to staff and not a single nurse or surgeon broke scrub, no matter the extent of the injury.

Karma can be a cruel mistress and I soon received my payback for contributing to Janess's unfortunate mishap. I was finishing up a case with Dr. Oddo that entailed resecting a menengioma. These tumors are outside the brain and with removal have an excellent prognosis. I was in a great mood thinking about how we were actually being  of some service to the poor soul suffering from this nasty,  neoplastic malady. One thing I've learned over the years is to be wary of those euphoric Kumbaya moments when everything seems to fall in place because a true shitstorm is often in the works.

Dr. Oddo had been using a foot pedal actuated Mallis bipolar cautery during the case. This nifty little device looks like a pair of tweezers with an electric cord attached to a high voltage generator. When Dr. Oddo tramped on his foot pedal electricity flowed between the tips of the tweezer like device cauterizing anything in between. It was a great little gadget for controlling bleeding in small vessels.

Dr. Oddo loved to instruct the anesthetist to lighten the anesthesia near the end of a case. One  of his favorite phrases in the post-op report was, "The patient was able to transfer from the OR table to the awaiting carriage independently." This sometimes made for exciting moments near the end of surgeries when the patient took ambulatory surgery to a new level and decided to bail out before the final skin sutures were in place.

Sure enough, just as Dr. Oddo started closing the skin flap the patient began to emerge from general anesthesia. As he came to, his right leg spasmed into a mighty lateral kicking motion impacting Dr. Oddo's leg poised with his foot just above the Bovie actuating pedal. I was tidying up by clearing off the operative field and was preparing to wipe down the distal, business end of the Bovie forceps. The patients kick to the good doctor's leg turned the Bovie forceps ON and as the juice flowed a sickening burnt flesh/charred rubber glove malodorous scent filled the air. 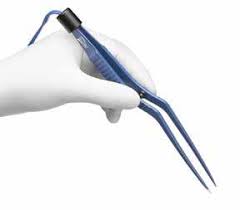 The Bovie had cooked my right index finger on the distal phalange. As the smoke cleared I requested a new glove and plunged  what was left of  my smoking finger into a fresh sterile barrier. There must be some truth to the notion the body releases pain killers when traumatized because initially I was pain free. Upon finishing the case and pealing off the second glove the extent of the injury became apparent. The end of my finger had extensive "remodeling" with the distal aspect about 1/3 AWOL.

Dr. Oddo helped me remove the melted latex glove from the wound and suggested wrapping the finger with iodoform gauze. Dr. Slambow was consulted and said "welcome to the club" while showing off a massive scar on his right palm. After about 4 weeks, it was time for the unveiling. Dr. Oddo involved himself in a spirited debate with Dr. Slambow questioning whether  the nasty blackish tissue around the wound was eschar or scar tissue.

After the unveiling and the scar/eschar mess was pealed off I had a functional but rather disfigured index finger with a square tip and missing 1/2 the nail. I never missed a day of work and today I regard what's left of the end of that finger as a badge of honor. It's better than thinking of it as a living monument to my foolishness.
Posted by Oldfoolrn at 6:49 PM

Email ThisBlogThis!Share to TwitterShare to FacebookShare to Pinterest
Labels: In The OR, Mishaps, Nurses