When the Human Body Works Like a 3D Printer 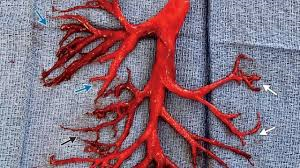 Here is a case of human reproduction that does not involve a gamete, egg, or mitosis. I would have mentioned "ploidy" too, but I'll be darned if I can remember what that involves. A 35 y/o man who was critically ill had a vigorous  coughing fit which was so  productive that he hacked up this blood clot which formed in his right main stem bronchus; a near perfect anatomic reproduction of the airway cast in blood.

Hemoptysis in the extreme, which formed a perfect casting demonstrating 5 branches of the bronchial tree. The clotting cascade was a real challenge to memorize and about the only thing I can remember  is the cross linking of fibrin forming the framework for the clot. It certainly out performed it's intended purpose in this case.

The right main stem bronchus is like a grease trap in a fast food restaurant because almost anything that goes down the trachea winds up here. It's the first bronchial segment to branch off and has a larger lumen than the left main stem bronchus. It's also more perpendicular making it the perfect exit ramp for just about anything coming down the trachea. Anesthetists always checked for bilateral breath sounds because it was so easy to selectively intubate the right main stem bronchus. An absence of left sided breath sounds?  Time to pull the endotrach tube out a bit to clear the right bronchus.

It's difficult for me to understand how a clot of this size could form because the most likely scenario would be a clot occluding the upper segment and blocking the filling of  the middle and lower branches.  This perfect cast of the bronchus jolted my memory and brought to mind another memorable anatomic replica produced by the human body.

Fecal impactions were a miserable experience for all parties involved and were common in old school hospitals as a side effect of prolonged bed rest combined with opiate analgesia. With the passage of time, pressure from the upstream accumulation of stool in the sigmoid colon  numbed the nerve endings of the internal sphincter. The end result was a massive hardened bowel movement firmly lodged in the sigmoid colon.

Removing these forbidding fecal accumulations was no easy task because the stool hardened to a consistency of Sakrete concrete. The first step in the unpleasant (to say the least) removal process was the rectal installation of warm mineral oil  in an often times futile attempt to soften the painful putrid plug. The final step was similar to a Roto Rooter operation whereby the mass was manually extracted.

One of my colleagues, Ann, was especially proficient at removing fecal impactions. Her fingers were lithe and she had the unique ability to curl the distal metacarpal at a right angle to the rest of her finger resulting in a hook. Her fecal impaction removal technique involved twisting her index finger much like a boring brace to gain entrance to  the tenacious turd. Having bored inside the monstrous mass much like an African dung beetle  she hooked her finger and gently increased traction until the massive mess slid out.

After the patient's  screams of agony subsided, the oows and ahhs began as attending staff members marveled at a perfect sculpture in brownish stool  of the sigmoid colon. The distal part of the colon is lined with haustral markings which delineate colonic saculation.  As the stool hardened a perfect colonic cast was formed.

Most nurses chipped away at fecal impactions which resulted in a hodge podge collection of fecal shreds. Ann's technique of rmoval in toto resulted in an anatomic model not  unlike the cast of the bronchus. Simply amazing!