Old time 3 year diploma nursing schools did not need sophisticated security systems or cameras because immediately after entering the front door you were face to face with a housemother or "house hags" as we fondly referred to them. We used to compare them to cancer; always present (24/7) and they could spread out anywhere in the  school or dorm without warning to induce fear and worry in a hapless nursing student. They controlled anyone and anything that entered the combination dorm and nursing school. There was only one way in and one way out and everyone that entered the building had to pass by the housemother's desk which was just past the student's mail boxes. The housemothers were also in charge of the mail.

If you were not studying during "study hour" which curiously spanned the hours between 7PM and 11PM you could get busted by the housemother  with a demerit. If you had a light on after 11PM you were busted. If you went home for a weekend and forgot to sign out at the housemother's desk,  you were busted again. That "friendly" housemother in the center of the illustration above is interrogating a student about some irregularity found in the signout card box. Things like this never ended well for the student nurse.

It must have been a serious transgression such as changing the sign in time to comply with the strict curfew hours or perhaps signing in for a roommate  because the hag on the far right in the illustration is already on the hotline to the school of nursing director's office. That hotline to the directors office probably caused us more angst than President Kennedy's nuclear armament phone did during the Cuban missile crisis. Sometimes students would try to sabotage it (the house hags phone, not the missile crisis) by unplugging it at the jack or even gluing the receiver to the phone base. Housemothers were very resourceful and always got the phone up and working again.

Another method to escape the housemother's scrutiny was the "Australian Crawl" technique. When 2 students came in past curfew one would distract the househag with claims of sobriety or sweet talk while the other crawled past below the threshold of the hag's window. At least only one student received a demerit with this deception.

On the opposite side of the lobby within the housemother's scrutiny  were 2 visitation rooms for non-conjugal visits with boyfriends. The rooms were slightly larger than a bathroom stall with partitions raised about 2 feet off the floor. There were benches on either side of the tiny room  with a small full length table in between. The rules were one boy and one girl on each bench with feet visible on the floor at all times. There was a complex work around for this rule that required stuffing each boy's pant leg with a shirt or whatever was available and then arranging the pseudo  stuffed leg into a shoe. It worked every time, and at the least provided some togetherness for the couple without having to negotiate around  the dividing table. 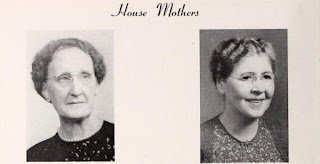 Don't be deceived by that veneer of a cute little old lady. That psedo-friendly  little smile could turn into a vicious grizzly bear of a snarl faster than you could come up with an excuse or confabulate a defense to an egregious offense such as  smuggling cafeteria food into the dorm. Housemothers could be a veritable cafeteria of emotions almost like a bipolar psych patient that neglected to take their Lithium. You never knew what to expect from them.


Appearances can be deceptive, don't let those granny glasses fool you, housemother's had the visual acuity of a hawk. Oh, and don't think those old one piece housedresses could slow a motivated housemother  down, these ladies could run faster than Michelle Griffith Joiner  and close in on a suspicious activity faster than a linebacker on steroids. They were definitely not people to be trifled with.

When patrolling the dorms at 11PM for lights out enforcement they could move about in absolute silence. There stealth was enough to instill a profound sense of paranoia. At times, it seemed like they could be in two places at once.

I have stuck in my memory an image of a distressed young student nurse which appeared in our yearbook with the caption, "I have come here to work and study for the next three years." She really looked as though she had been sentenced to death by firing squad, but I suspect she had just had a run in with one of the housemothers about being 5 minutes off in her sign-out time. Those housemothers were a really scary bunch.

Posted by Oldfoolrn at 5:54 PM